Posted on March 8, 2011 by northernleagueday

When the A1 Western Bypass was built to divert through traffic around Newcastle and Gateshead centres residents of Dunston were divided. Quite literally. The A1 cut right through Dunston splitting the village into two areas. By this time the heavy industry days involving soap, coke, boats and an ailing power station (which a few years previous had been immortalised in the opening, funeral scenes in Get Carter) were either gone or severely numbered. It was 1975, local lad Brian Johnson was still in local band Geordie but meanwhile, in a government office in Gateshead, something more wholesome was brewing. Staff at Her Majesty’s Stationery Office in Gateshead put their pencils and paper to good use to draw up plans to form a works football team. Calling themselves Whickham Sports FC, the club’s founder, John Thompson, doubled up as team manager as the club began their history in the Northern Amateur League.

Currently sitting mid-table in the skillstrainingltd Northern League Division 1, the club currently known as Dunston UTS FC have undergone more name changes than Prince during their relatively brief existence. Winning a string of honours in the latter part of their formative decade, the club swapped their staplers for spanners to become Dunston Mechanics FC in the early ‘80s. Some four years later the club embarked on a naming-rights sponsorship deal with the local brewery, and so it came to pass, in 1986 Dunston Federation Brewery FC was born. In 1988 the then Newcastle manager, Willie McFaul, brought a United side to commemorate the official opening of Federation Park, and to mark a new chapter in the club’s history. 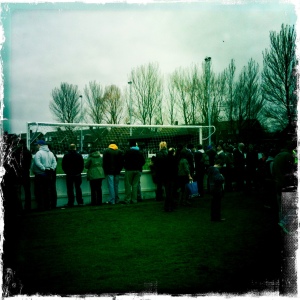 Although the club’s name changes have largely been driven by sponsorships, don’t even begin to think ‘corporate franchise’. It’s arguably more an indictment on the FA’s lack of grassroots investment that a club feels they need to make such a commercial decision. Carrying on regardless, the club continued to win trophies, and promotion to the Northern League, but losing their main sponsorship deal with the brewery meant further turmoil, and another name change. In 2007, the club’s Unibond league aspirations became unstuck and Dunston withdrew their application to join. The club became Dunston Federation FC, before eventually securing a new naming rights deal two years later with Jarrow based engineering firm UTS. Whether Arthur or Martha, Dunston have a football club they can be proud of.

Dunston is nestled between Swalwell and Bensham on the south bank of the Tyne, a stone’s throw from Newcastle’s western district of Elswick. With a reported capacity of 2,500 the UTS Stadium is green and homely with plenty of standing room, two covered stands and a fine club bar. Entering via either turnstile on Wellington Road/St Omers Road (it’s essentially the same bit of road), through the trees, we arrive on the north side of the ground beneath two towering mobile phone masts which straddle the main stand. The main building which houses the club bar, cafe and changing rooms is situated in the north-west corner of the ground. The narrow standing area follows the entire perimeter with grass banks on both the south-east and east sides for an elevated standing view, depending on the weather. Named after arguably Dunston’s most famous son, Paul Gascoigne, the main stand provides seating along the north touchline along with press facilities, whilst opposite is a similar sized, standing room only, shelter along with the team dugouts.

Make time to enjoy a couple of beers in the club bar. It’s clear from the decorations that not only are they proud of their own brief history, but also of their illustrious neighbours from across the Tyne. Brass plaques celebrate both the official opening of Federation Park in 1988 but also the naming of the Paul Gascoigne stand.

Getting there: By road, the postcode is NE11 9JL. Heading south on the A1, take the Dunston turn off just past the MetroCentre, turn left and follow Dunston Road until it bears left onto St Omers Road. The number 49 bus from Gateshead Interchange (beside Gateshead Metro Station) runs roughly every half an hour on Saturday and will get you to Wellington Road in about 10 minutes. Alternatively, the ground is a fifteen minute walk from Dunston train station.

Many thanks to David Jameson, ex-editor of the much lamented Newcastle United fanzine Half Mag Half Biscuit.

You can read two excellent groundhopper blogs on Dunston’s 2-1 defeat to Whitley Bay in the FA Vase quarter final at Paul Kirkwood’s Up for the Cup and The Real FA Cup by Graham Yapp.

This entry was posted in Ground Guides and tagged Dunston UTS. Bookmark the permalink.